Finally, a song about a canal!

If we say that this song is about a canal, we follow the widely spread theory that its historical background is related to the construction of the Manchester Ship Canal, which was built to allow the passage of the largest of ships to Manchester. It is furthermore to be supposed that the song was made up as a mocking song by the inhabitants of Liverpool, who were unhappy that Manchester about this new built connection of Manchester to the sea.

But let us start from the beginning. If you take a look at the map you can easily see that people in Manchester had a problem. The distance from Manchester to the sea is about 36 miles. 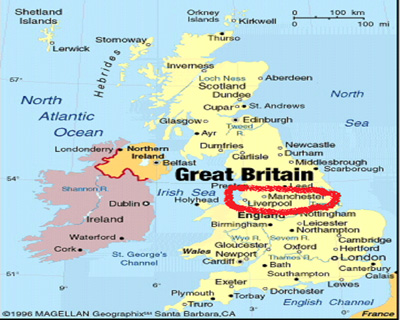 In the 18th century it was already possible to navigate from Manchester to the Irish Sea, because the rivers Mersey and Irwell had been made navigable for small ships in the years 1724 to 1734. Beside the waterway, goods and freight had also been transported since 1830 by railway. Both transport routes had to deal with the same problem: In Liverpool the freight had to change from trains or small boats to the big ocean ships. According to the opinion of tradents of Manchester the Liverpool docks charged too much money for this service. In order to load the ships directly in Manchester, creating jobs in the area and keeping the money in Manchester, a canal was needed, large enough to allow big ships to navigate directly from the sea to the city and vice versa. Obviously the people of Liverpool did not like that idea and they campaigned hard to stop its construction. However, in 1887 the project was started and the Manchester Ship Canal was finally finished in 1894. At that time it was the largest river navigation canal in the world.

The big ship sank to the bottom of the sea

The words suggest that the ship sank to the bottom of the SEA and not the canal. However, it is possible that this verse and also the following one have been added over time, after the initial meaning got lost in the course of history. 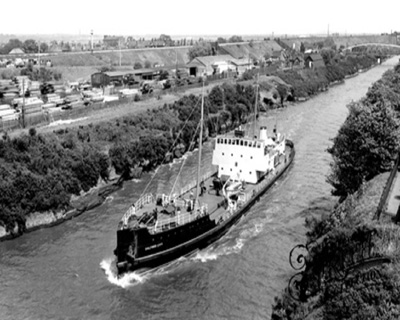 Strong evidence for the theory that this song is related to the Manchester Ship Canal is the sentence,

Oh, the big ship sails on the ally-ally-oh

We may suppose that the word ‘ally‘ (allee) - means alley, a passageway or narrow street, usually large enough for transport in the 19th century. We may also suppose that the ship doesn’t really sail ON the alley but ALONG the alley - and that a spectator looking at it from far away would have the impression that it sails actually ON the alley. Now the verse makes a lot more sense! Big ships, built to cross the ocean, never sail or navigate inland, at least they weren’t known to do so before the Panama Canal, the Suez Canal and other large canals of this type were built. That such a big ship could navigate along a street or alley was something quite unbelievable, certainly for those people who did not want to believe it – especially the people of Liverpool! If you look at the photo you can easily imagine that from some persepectives, it may seem that the ship is actually navigating on the alley. It must have been quite amazing at that time!