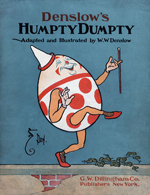 ...However, the egg only got larger and larger, and more and more human: when she had come within a few yards of it, she saw that it had eyes and a nose and mouth; and when she had come close to it, she saw clearly that it was HUMPTY DUMPTY himself. `It can't be anybody else!' she said to herself. `I'm as certain of it, as if his name were written all over his face.' It might have been written a hundred times, easily, on that enormous face. Humpty Dumpty was sitting with his legs crossed, like a Turk, on the top of a high wall -- such a narrow one that Alice quite wondered how he could keep his balance -- and, as his eyes were steadily fixed in the opposite direction, and he didn't take the least notice of her, she thought he must be a stuffed figure after all. `And how exactly like an egg he is!' she said aloud, standing with her hands ready to catch him, for she was every moment expecting him to fall.
`It's very provoking,' Humpty Dumpty said after a long silence, looking away from Alice as he spoke, `to be called an egg -- very!' `I said you looked like an egg, Sir,' Alice gently explained. `And some eggs are very pretty, you know, she added, hoping to turn her remark into a sort of a compliment. `Some people,' said Humpty Dumpty, looking away from her as usual, `have no more sense than a baby!'…..“

by Lewis Carrol, Alice in Wonderland, Chapter Six (Through the looking-glass, and what Alice found there)

Humpty Dumpty however is a very special case. Although he is famous, we know very little about him, perhaps even nothing about him. He is famous despite the fact that we know as much about his character as of any other egg. We don’t even know when he appeared the first time. We do know that he existed before 1862, the birthday of Alice in Wonderland, because when Alice met him the first time, she already knew him.

„…. and when she had come close to it, she saw clearly that it was HUMPTY DUMPTY himself…“

The only thing we know concerning his character is the fact that he had none. And that’s not very nice! Despite being a characterless egg, according to Lewis Carrol, people are nothing but eggs. 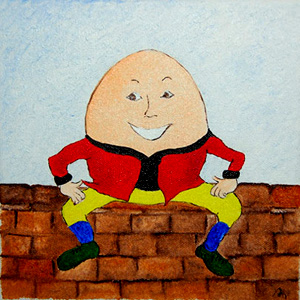 „ … `I shouldn't know you again if we did meet,' Humpty Dumpty replied in a discontented tone, giving her one of his fingers to shake; `you're so exactly like other people.'
`The face is what one goes by, generally,' Alice remarked in a thoughtful tone.
`That`s just what I complain of,' said Humpty Dumpty. `Your face is that same as everybody has -- the two eyes, so -- ' (marking their places in the air with this thumb) `nose in the middle, mouth under. It's always the same. Now if you had the two eyes on the same side of the nose, for instance -- or the mouth at the top -- that would be some help.'
`It wouldn't look nice,' Alice objected. But Humpty Dumpty only shut his eyes and said `Wait till you've tried.' ….“

It seems that Humpty Dumpty has been sitting on that wall for a long time, with no contact to the outside world. He doesn‘t even knows that he is famous.

„…`Don't you think you'd be safer down on the ground?' Alice went on, not with any idea of making another riddle, but simply in her good-natured anxiety for the queer creature. `That wall is so very narrow!'
`What tremendously easy riddles you ask!' Humpty Dumpty growled out. `Of course I don't think so! Why, if ever I did fall off - - which there's no chance of -- but if I did -- ' Here he pursed his lips and looked so solemn and grand that Alice could hardly help laughing. `If I did fall,' he went on, `The King has promised me -- ah, you may turn pale, if you like! You didn't think I was going to say that, did you? The King has promised me -- with his very own mouth -- to -- to -- '
`To send all his horses and all his men,' Alice interrupted, rather unwisely.
`Now I declare that's too bad!' Humpty Dumpty cried, breaking into a sudden passion. `You've been listening at doors -- and behind trees -- and sown chimneys -- or you couldn't have known it!'
`I haven't, indeed!' Alice said very gently. `It's in a book.' …“

While it maybe written in a book somewhere, we do know there is a famous nursery rhyme about Humpty Dumpty. Everyone knows that the king promised to put him together again if he falls from the wall. What Humpty Dumpty doesn’t want to know (although he knows it) and what Alice doesn‘t want to tell him (although she knows it) is that the king will not be able to put him together again. So this special and very famous egg, perhaps like all eggs, sees what he is, but ignores what he doesn‘t want to know.

Some of Humpty Dumpty’s ideas are not so bad. It would of course be much more rewarding to celebrate the non-birthdays (364 gifts, one for each non-birthday) rather than the one birthday a year (1 gift). Humpty Dumpty’s other conclusions are more tenuous.

„….`And only one for birthday presents, you know. There's glory for you!' `I don't know what you mean by "glory,"' Alice said. Humpty Dumpty smiled contemptuously. `Of course you don't -- till I tell you. I meant "there's a nice knock-down argument for you!"' `But "glory" doesn't mean "a nice knock-down argument,"' Alice objected. `When I use a word,' Humpty Dumpty said in rather a scornful tone, `it means just what I choose it to mean -- neither more nor less.' `The question is,' said Alice, `whether you can make words mean so many different things.' `The question is,' said Humpty Dumpty, `which is to be master - - that's all.' …“

In theory yes, why not? Of course we can say‚‘we talked a lot dinnerly’ instead of, ‘we talked a lot during dinner’, or ‘she cookingly spent the afternoon’ instead of‚ ‘she spent the afternoon cooking’. How would one communicate if everyone gave different meaning to words? You might argue that this is something that already happens. Everyone puts their own feelings, experiences, ideas into words and therefore words already have different meanings. But this takes it too far. We are talking about an egg and an egg doesn’t have individual emotions, feelings, experiences to be put into words. For every egg, a single word should have the same meaning.

One final problem, perhaps the largest problem, remains unresolved. Who is Humpty Dumpty? You could say an egg. That’s true, but has he always been an egg or did he become an egg in the course of history? Some people say Humpty Dumpty was initially a cannon and later became an egg. That’s when the historical context of the song and Humpty‘s birth are lost. Let’s have another look at the text of the song.

Perhaps there was an alternate version of the text, in the context of a riddle.

We know the lyrics of songs are often changed to fit with a certain historical event: ‘Threescore men‘ became ‘All the King’s men‘, so it is assumed that there was a particular reason for the change in lyrics. What was the event in history where Humpty Dumpty had a relationship to the king, his men and his horses? 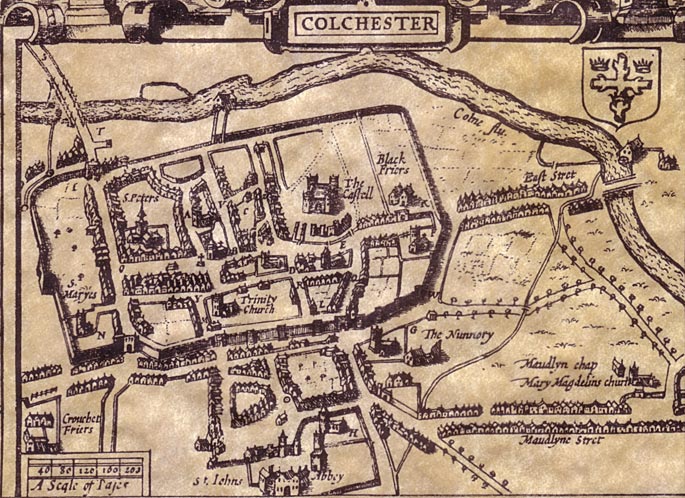 There are many who establish a relationship between this song and the English Civil War from 1642 to 1649, that ended with the execution of Charles I, King of England and Scotland, and the take-over of power by Oliver Cromwell. Following this theory, a cannon named Humpty Dumpty - one which actually existed - was put on the tower of a Church in Colchester (South East of England) by the troops of Charles I, from where they fired on the Roundheads, Cromwell‘s army of the parliament, conducted by Lord Fairfax.

In order to stop from being fired upon, the Roundheads fired on the tower and succeeded in knocking down the cannon, and neither the king's men nor the king's horses were able to pull it into position again.

Another theory suggests that Charles I was Humpty Dumpty himself. After finally losing the war he was executed despite all his men and horses. These, however, can only be theories, with no actual proof in existance.

What other arguments support these theories?

1) We do know for certain that the text has been changed. The line ‘Threescore men and threescore more‘, was changed to ‘All the King's horses and all the King's men‘. It is likely that the text of the original song was altered to better fit better with the circumstance at the time.

If we don’t accept that there was a historical reason for this substitution, we need another theory to explain the change.

2) There are many songs, as we can see in this collection of nursery rhymes, that deal with conflicts during the regencies of Henry VIII, Mary I, James I, Charles I, Charles II and James II. In the unsecure political, social and religious situation during
these years, people expressed their opinions by producing new songs or changing already existing ones. There are many similar songs with historical significance.

3) Humpty Dumpty is a good example of a song which developed complexity during the course of time. When Lewis Carrol heard it for the first time, it was just a nursery rhyme about an egg. Now, the Humpty Dumpty in chapter 6 of Alice in Wonderland is a complex figure. We can see how easily a song can change its meaning and become independent from its original meaning. It may well have been that the song was initially a riddle, but later used to deride Charles I.