Wee Willie Winkie
Runs through the town,
Upstairs and downstairs
In his night-gown,
Tapping at the window,
Crying at the lock,
Are the children in the bed?
It's past ten o'clock

Willie Winkie,
Are you coming in?
The cat is singing
Purring sounds
to the sleeping hen,
The dog's spread out on the floor,
And doesn't give a cheep,
here's a wakeful little boy
Who will not fall asleep!

Hey, Willie Winkie
The child's in a creel!
Wriggling from everyone's
Knee like an eel,
Tugging at the cat's ear,
And confusing all her thrums

Hey, Willie Winkie –
See, here there he comes!
Wee Willie Winkie
Runs through the town,
Upstairs and downstairs
In his night-gown,
Tapping at the window,
Crying at the lock,
Are the children in the bed?
It's past ten o'clock 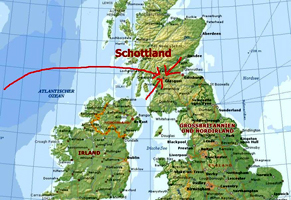 This nursery rhyme is kind of a "medley" based on two different poems ( "Wee Willie Winkie" and "Jack Be Nimble") which were interwoven and put into music by Ian Watts and performed by the British Kinks Tribute Band The Kinx:

Let's start with "Wee Willie Winkie". The poem was written by Scottish writer, William Miller (1810 - 1863). He was born in Glasgow, lived in Glasgow and died in Glasgow. So it is hardly surprising that the original version is Scottish:

Wee Willie Winkie rins through the toon,
Up stairs an' doon stairs in his nicht-gown,
Tirlin' at the window, crying at the lock,
"Are the weans in their bed, for it's now ten o'clock?"


Weary is the mother who has a dusty child,
A small short little child, who can't run on his own,
Who always has a battle with sleep before he'll close an eye
But a kiss from his rosy lips gives strength anew to me.


Wee Willie Winkie was a town crier and night watch, running through the streets at night to make sure things are going well. "Jack be nimble" originates around the the same time. In those days jumping candlesticks was a way of fortune telling: If the candle kept burning that meant luck for the future whereas an extinguished flame was believed to be a bad sign.