We have joined together 2 historical nursery rhymes to one song: Little Jack Horner and Little Miss Muffet. Both rhymes sound similar and both rhymes use the same metre. Ian J Watts has set the new songs to music.

The first part of "Little Jack Horner" is about a boy eating Christmas pie. He sticks his fingers into the pie and pulls out a plum which is very naughty of course but the boy seems to be pleased with himself and says: "What a good boy am I." So far so good but the rhyme seems a bit pointless. There must be another meaning because if these lines were pure nonsense they certainly would have disappeared at some time.

This is a possible explanation: Little Jack Horner refers to the secretary of the Bishop of Glastboury, Richard Whiting (1461 - 1539). The bishop was concerned about the expropriation of the monasteries arranged by Henry VIII. We mentioned him before, King Henry VIII, the father of Mary I Tudor, who was kept back from the thrown due to one of the many marriages of her father and became Queen of England later on, trying to restore Roman Catholism in England (see Mary, Mary quite contrary). But back to the bishop and his worries regarding the menacing expropriation of Glastboury. To forestall the threat of 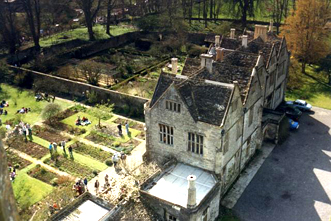 expropriation, he sent his secretary (Jack Horner) to King Henry VIII, with a cake, in which the deeds of manors were baked in. The most valuable of these documents, the Manor of Mells, is the plum, which he pulled out of the cake.

However, Richard Whiting failed and was accused of treachery because he did not officially abondan Catholism. Jack Horner was called as a witness when the trial took place and he incriminated the Bishop. At the end of the trial Jack Horner was given the Manor of Mells and his family remained owner of the estate up to the 20th century. There is another Nursery Rhyme dealing with the subject:

Hopton, Horner, Smith and Finn,
when the abbots went out, they came in.

This is another proof that there might be some truth within the legend. Horner stands in a row with a series of commercially successful Protestants: Hopton, Smith and Finn. All of them purchased land at a very low price after it has been taken away from the Catholic Church.