Oh yes! There are nursery rhymes - very few, but they do exist - in which the Stuarts don‘t play any role. You can think whatever you want about the Stuarts, but there is no doubt that they were the most powerful source of inspiration for the english nursery rhymes. 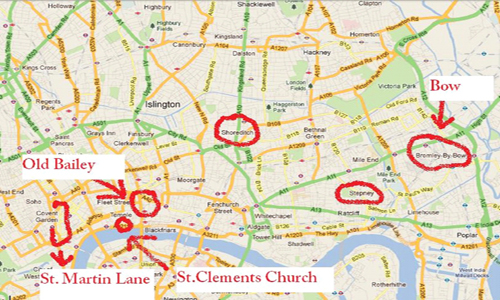 There are several theories about the meaning of this truly historic Nursery Rhyme, but let's begin with the one that seems to be the most convincing at first glance. Following this theory, someone bought oranges and lemons near the church of St Clements, but was not able to pay for them. He was brought to court (Old Bailey) and asked when he was going to pay, but being poor (Shoreditch), he said he would when he grew rich. Someone (Stepney) asked when that is going to be, and someone else (Bow) answered that he didn’t know, probably believeing it never would happen. Unable to pay, he got cut his head off. As you can already see from this information, time has indeed changed. Once, it would seem, you could get your head cut off for some pennies, today the city of London can burn billions of pounds and the people responsible are rewarded - nobody thinks about sending them to court. There has been much progress during the last centuries!

This theory is based on the specific characteristics of the locations mentioned in the song.

"Oranges and lemons" say the bells of St. Clement's

Most probably the church mentioned is St. Clement Church, Eastcheap, near the London Bridge and the Thames. There is some dispute between different parishes, all claiming to be the church the song refers too, but actually that has no importance here at all, because all of these churches (although there is only one with the name St. Clement) are near the wharf where fruit from around the world was unloaded from the ships. For the meaning of the song, it doesn’t therefore make any difference if the song refers to the church of St. Clement or any other church, provided the church is close to the wharf or to the Leadenhall Market, the place the fruit was transported to be sold.

"You owe me five farthings" say the bells of St. Martin's

In St. Martins Lane is the church, St. Martin-in-the-Fields. Whether the actual church is the one refered to in the song or not depends on when the text of this version of the song was added to the melody of “Oranges and lemons“, published for the first time in 1655 without text. If the text was added after 1724 it can t be the actual church. If the text was added before 1724 you see the church the song refers to on the photo. 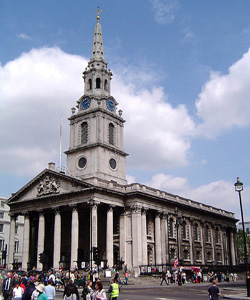 Although we can find a lot of information about this street on the internet, for instance here:

we cannot find any information allowing us to better understand why the bells of St. Martin-in-the-Fields say “you owe me five farthings“. It could easily be any other church! The interesting point is the mention of a concrete sum - five farthings. For the people outside of England, the farthing was a currency in England from the thirteenth century until 1961, when it was no longer accepted. A farthing is a quarter penny, five farthings are therefore one penny and a quarter. In the seventeenth century half a loaf of bread cost ½ penny. There is no way to find out how many oranges one might get for a penny, but it is to be supposed that it wouldn’t be many! Why this unfortunate person run up depts to buy oranges AND lemons is unclear. There is no doubt that both of them are citrus fruits, but they are used for completely different things. Oranges are used like apples, cherries or pears - one just eats them. Lemons are used in some countries to flavour fish and many other things, but rarely consumed entirely (the Persians consume them entirely - with salt. Eughh!) . The only thing they have in common, from a consumer point of view, is the fact that both of them are rich in Vitamin C. That could be a reason why someone may run up debts to buy oranges and lemons. He/she or someone near to him/her was suffering from scurvy, and although it was only really known from 1747 that scurvy could be helped with oranges and lemons, when James Lind discovered the relationship, there is some proof that this was generally known before. A logical reason to run into debts buying oranges and lemons might be to prevent someone beloved dying from scurvy.

"When will you pay me?" say the bells of Old Bailey

Nowadays Old Bailey is the Central Criminal Court, named after the street where it is located. Important criminal cases are dealt with there. In relationship to the song, two questions arise. First, is the actual building the one the song refers to and second, is it plausible that minor offences were treated at Old Bailey. 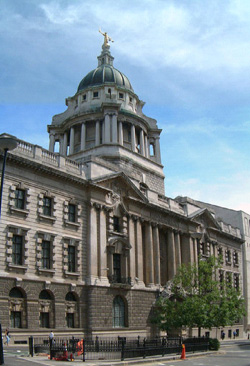 In order to know if this is the building the song refers to we would need more information about the time the text of the song was composed, because Old Bailey has been destroyed and rebuilt several times. The actual building seen now dates from 1907, and therefore must have nothing to do with the building in the song. Nowadays only important cases are dealt with at Old Bailey, but perhaps in the seventeenth century, the time the song was probably composed, minor offences were dealt with on the site as well, although it is not very plausible that it was all of them. In the seventeenth century London had approximately 400,000 inhabitants and it is to be supposed that each day there were several hundreds of “criminal acts“ of this kind. In any case too many for one building, even if the average time for one trial was only half an hour.

They were able to do this because trials were very short, averaging perhaps half an hour per case. In a typical day early in the history of the Proceedings the Court might hear between 15 and 20 cases.

The law system in the seventeeth century was certainly foolish, there’s no doubt, but it is not true, as suggested by the song and spread through the comments about it all over the internet, that petty larceny got punished with the death penalty.

Of Theft Under 1 Shilling

This verdict reduced the charge against the convict to petty larceny, which meant that the defendant was punished by a fine, whipping, or, increasingly from 1718, by transportation.

1.25 pennies (five farthings) was roughly 0.104 shillings. For this amount of money nobody was sentenced to death, at the most he may be transported to the United States or Australia, where he may have a better life.

"When I grow rich" say the bells of Shoreditch 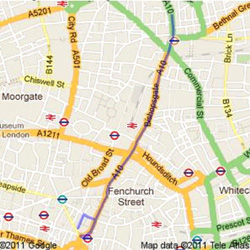 We have already seen that is plausible through certain circumstances to run into debt buying oranges and lemons. Another question may be - how much time would it take to go from Shoreditch to St. Clement Church Eastcheap to buy oranges and lemons. It would take, if we believe google, six minutes by car, or let us say half an hour walking. 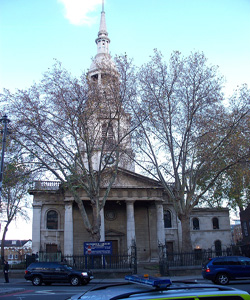 That’s quite a walk for some oranges and lemons and still more if we take into account that more or less any fruit would have had the same effect, because most fruit contains Vitamin C, something people of the time were not aware of. Concerning the church mentioned in the song, this time we have a better chance that it is the church we still see there today, because the current building dates from 1740.

It is often argued that the buyer of the oranges and lemons comes from the poorer boroughs - the reason why he was not able to pay. This was at least true in the sixteenth and the beginning of the seventeenth century, when Shoreditch was outside the city of London and therefore an ideal location for theatres and other immoral institutions! It was the location of the famous Curtain Theatre, where such immoral theatricals were played - like those of a certain William Shakespeare! 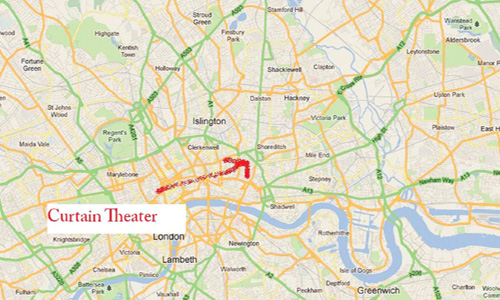 Later, when the silk weavers moved into the area, it became a wealthy borough and it become still wealthier when the furniture industry settled there. It is only later, in the nineteenth century, with the decline of the silk and furniture industries, that the borough became once again poor. The affirmation often spread in relationship to this song, that Shoreditch, Stepney and Bow were poor boroughs, is only true for the 17th century and the beginning of the 18th century.

"When will that be?" say the bells of Stepney

These bells are the bells of the church St Dunstan's. As in the cases before we can not be sure that the actual church is the

one the song refers to, because the church has been modified several times.
Although the church is very old, it was mentioned for the first time in 952, it seems that it was sparsely populated until the 19th century. Little information is available about the social status of the people living there in 17th and 18th century. The information spread through comments about this song, that all these boroughs were populated by poor people, is perhaps misleading. It is more likely that the different bells very chosen for alliteration and rhyme.

It is well possible that the origins of the song goes back to an incident similar to the one described (someone bought some fruit for example but was not able to pay it) but later the text was changed in order to fit better with the rhyme. The interpretations given in the comments about this song don’t fit very well with the historical facts.

"I do not know" say the great bells of Bow 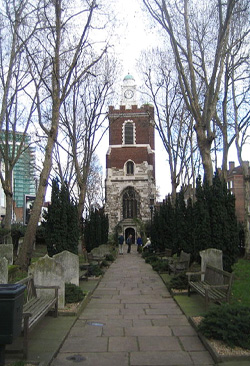 Perhaps this is the church the song refers to. The Bow Church, the parish church of St Mary and Holy Trinity in Stratford / Bow is located on the Bow road and was built in 1311, but no information is available as to whether it has been modified since that time or not. No evidence is given for the widely spread affirmation that Bow was a poor borough. It is known only that in the 17th century, Bow was a cattle market and center for meat packing. 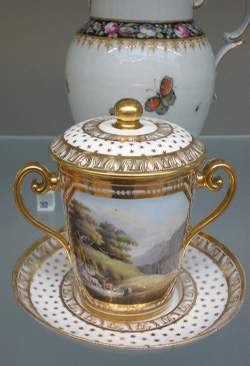 Due to the slaughter of cattle there was large supply of bones, well suited to make bone china, a fine porcelain produced by adding bone ash. In 1748, Thomas Frye from Bow porcelain factory (East-London, Stratford le Bow), got a patent on a special procedure to produce bone porcelain. If we look at the photo the affirmation that Bow was a poor borough becomes more doubtful.

"Here comes a candle to light you to bed
And here comes a chopper to chop off your head!”

It is often said that these verses mean that the person who was unable to pay for his/her oranges and lemons had his head cut off, because the inability to pay was treated like robbery. This affirmation is false for two reasons. Although the judicial system in the 16th and 17th century was a little strange, the inability to pay was never treated as robbery - and even a robber wouldn t have had his/her head cut off for five farthings.

It is quite possible that initially the song was about poverty, but afterwards the text was changed to fit better with the rhyme.

"Here comes a candle to light you to bed
And here comes a chopper to chop off your head!”

are reached. This child remains caught inside the arms and is ruled out of the game.