That’s the way the money goes,
Pop! goes the weasel.

This nursery rhyme has also many interpretations (and versions). One of these interpretations and versions establishes a relationship between the pub “The Eagle“, on Shepherdess Walk, London and this song. The Eagle itself seems to be very proud of that history. They have placed a plaque on the wall referencing the song, although we don't really know if a more “serious“ company would do that, as the story behind the song is a little bit strange. But bad marketing is better than no marketing at all. 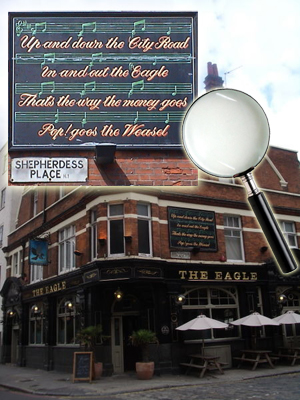 Actually, the text on the plaque is not included in our version of the song, but it is well known. We can see a general phenomenon: If an affirmation is spread widely, people start repeating it and the affirmation becomes a generally accepted truth. It seems that there are a lot of people who think that the monkey is the barkeeper, chasing the weasel (the cobbler) around the cobbler’s bench, persuading him to drink more than he should. At the end, the weasel (the cobber), was obliged to go to the pawnshop to pawn the items he needs for his work, the needles and the thread, for more money. Following that theory “pop“ would be a cockney slang word for “pawn“ – to loan an item for money. In a comment about the eagle we read on the internet:

Up and down the City Road, In and out the Eagle, That's the way the money goes. Pop! goes the weasel'. For those who are interested in history, not many pubs can lay claim to being mentioned in a nursery rhyme - an old cautionary tale about spending all your money on booze.

This, of course, is just one possible meaning of the song. People who study folk songs in a more professional way are normally looking for the “original“ meaning of a song. But this might end in some kind of misunderstanding. It is very well plausible, that this song once had a completely different meaning. It is even true, that there are many different versions of the text. But when a song evolves in the course of history for whatever reason and is understood by society in a certain way, at a certain time, then that meaning becomes true, independent from the original meaning. The better approach would therefore be to ask for the specific meaning of a song for people in a specific period.