Although not unequivocally linked to an historical event or specific year, this is another example of a nursery rhyme with a historical background. The song tells a story:

Georgie Porgie, Puddin' and Pie,
1) It seems that Georgy Porgie, whoever he is, may be overweight because he eats too much pudding and pie

Kissed the girls and made them cry,
2) He promised a lot of things to girls, but he never kept his promises – or simply was unattractive to them

Georgie Porgie ran away.
4) In case of any conflict, he prefers to run away, in other words, he is a coward.

Therefore, we can assume Georgie Porgie is an immoral figure: lazy, despicable, greedy and cowardly.

It is well known that writers from various cultures in the world like to use myth, history or song to give deeper sense or meaning to their work. Christian and Greek mythology and even fairy tails are often employed by writers for similar purposes.

He held an appointment in Lower Burma when the order came to break the Frontier, and his friends called him Georgie Porgie because of the singularly Burmese-like manner in which he sang a song whose first line is something like the words 'Georgie Porgie.' Most men who have been in Burma will know the song. It means: 'Puff, puff, puff, puff, great steamboat!' Georgie sang it to his banjo, and his friends shouted with delight, so that you could hear them far away in the teak-forest.

Perhaps there are people in England still singing this song. However since the historical event this song refers to was lost in the course of history it just sounds like “puff, puff, puff, great steamboat!“
Should we believe, that there was actually a man who“kissed the girls and made them cry,“ called Georgie Porgie? Georgie Porgie, in Kipling’s story, is employed by the English administration in Lower Burma (today Myanmar) in the second part of the 19th century. He ‘married‘ a Burmese girl, who was the opposite of him: beautiful, romantic, sensitive and honest. He leaves her to marry an English women. It is not clear whether the Burmese girl commits suicide at the end, nor is the message at the end of the story particularly clear.

The Bride and the Bridegroom came out into the verandah after dinner, in order that the smoke of Georgie Porgie's cheroots might not hang in the new drawing-room curtains. 'What is that noise down there?' said the Bride. Both listened. 'Oh,' said Georgie Porgie, 'I suppose some brute of a hillman has been beating his wife.' 'Beating--his--wife! How ghastly!' said the Bride. 'Fancy YOUR beating ME!' She slipped an arm round her husband's waist, and, leaning her head against his shoulder, looked out across the cloud-filled valley in deep content and security. But it was Georgina crying, all by herself, down the hillside, among the stones of the water-course where the washermen wash the clothes.

We have no problem in understanding why Kipling called his hero Georgie Porgie. What is less clear, is why the author Roald Dahl called the protagonist of his tale Georgie Porgie, in his collection of short stories called Kiss Kiss, published in 1960. In this short story we find a man who is obsessed by the idea that he will be swallowed when kissed by a woman. When he is actually kissed by a woman, he goes mad and is taken to a lunatic asylum. Perhaps weak and lazy characters get ‘lost‘, if they kiss too much. In any case, a song from the 17 century has been given a very modern interpretation by Roald Dahl.

A similar verse appears once again, in a modified version, in chapter five of Brave New World by Aldous Huxley.

Round they went, a circular procession of dancers, each with hands on the hips of the dancer preceding, round and round, shouting in unison, stamping to the rhythm of the music with their feet, beating it, beating it out with hands on the buttocks in front; twelve pairs of hands beating as one; as one, twelve buttocks slabbily resounding. Twelve as one, twelve as one. "I hear Him, I hear Him coming." The music quickened; faster beat the feet, faster, faster fell the rhythmic hands. And all at once a great synthetic bass boomed out the words which announced the approaching atonement and final consummation of solidarity, the coming of the Twelve-in-One, the incarnation of the Greater Being. "Orgy-porgy," it sang, while the tom-toms continued to beat their feverish tattoo:

"Orgy-porgy, Ford and fun,
Kiss the girls and make them One.
Boys at 0ne with girls at peace;
Orgy-porgy gives release."

"Orgy-porgy," the dancers caught up the liturgical refrain, "Orgy-porgy, Ford and fun, kiss the girls …" And as they sang, the lights began slowly to fade–to fade and at the same time to grow warmer, richer, redder, until at last they were dancing in the crimson twilight of an Embryo Store. "Orgy-porgy …" In their blood-coloured and foetal darkness the dancers continued for a while to circulate, to beat and beat out the indefatigable rhythm. "Orgy-porgy …" Then the circle wavered, broke, fell in partial disintegration on the ring of couches which surrounded–circle enclosing circle–the table and its planetary chairs. "Orgy-porgy …" Tenderly the deep Voice crooned and cooed; in the red twilight it was as though some enormous negro dove were hovering benevolently over the now prone or supine dancers. They were standing on the roof; Big Henry had just sung eleven. The night was calm and warm.

Bernhard, one of the few people who still conserved some individuality, participates in a session to celebrate the Greater Being. This is a god named Ford, in “honour“ to Henry Ford - a representative of a world of consumer desires that may be satisfied or manipulated, converting mass production into a kind of religion for the masses. In “becoming One“, the participants lose all individuality and if there is no individuality, being alive or dead doesn‘t make such a big difference.
The meaning of the verse completely changes in Aldous Huxley‘s version.

Original
Georgie Porgie, Puddin' and Pie,
Kissed the girls and made them cry,
When the boys came out to play
Georgie Porgie ran away.

Aldous Huxley
Orgy-porgy, Ford and fun,
Kiss the girls and make them One.
Boys at 0ne with girls at peace;
Orgy-porgy gives release.

This should be enough to illustrate a well known phenomena. Fairy tails, myth, songs etc. of the collective conscious are very often given a new meaning. We are going to see throughout the other songs of this nursery rhyme collection several similar examples. Needless to say, these insinuations are only effective within cultures where they can be understood. Only a few myths, like those in Christian or Greek mythology, are really universal and can be understood everywhere.

There is a second version of the song and it is unknown which is the original..

Rowley Powley, pudding and pie,
Kissed the girls and made them cry;
When the girls began to cry,
Rowly Powley runs away

The historical context this song refers to doesn’t really matter. Rowley Powley is someone we imagine to be round, which fits well to someone who eats too much pudding and pie. “When the girls began to cry“ changing to “When the boys came out to play“, seems to fit better with a specific situation.

There are three candidates for Georgie Porgie: George Villiers (1st Duke of Buckinghamshire during the reign of James I), Charles II and George I.

The author of this song was most likely not referring to George I. This is because almost all the songs with historical background are set within late Tudor and early Stuart times, about kings and queens such as Mary I (Bloody Mary), James I (the son of Maria Stuart), Charles I, Charles II, James II and pretender to the throne Charles Edward Stuart (Bonnie Prince Charlie) - the protagonist of the song Speed, Bonnie Boat, and historically linked to the song The Bonnie Banks of Loch Lomond.

George I was the first Hanovarian, a German blood relative of Queen Anne, the last Stuart monarch. More importantly, he was not a catholic! In those days, being catholic was even worse than being German!

George Villiers (1592 – 1628) made it to the top during the reign of James I and his son Charles I. This rise to be one of the most influential persons in England had nothing to do with his political or diplomatic skills, or any other merits, but had to do with his very close friendship with James I and Charles I. There is a rumour that this relationship was sexual. His name, and the fact that he really did ‘run away‘ from the Spanish Armada when his underprepared military actions ended with a disaster, suggest that the song could be about him. On the other hand the verse Georgie Porgie, pudding and pie doesn’t absolutely fit, because George Villiers was not particularly overweight at all. He was supposedly very handsome, at least in the eyes of James I. 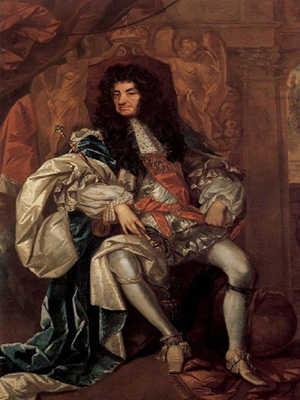 Perhaps the better candidate is Charles II. It is hard to say whether he was really fat. In any case he doesn’ t look like Michael Phelps, that‘s for sure!

The author of these lines would say that he was fat. The line “Kissed the girls and made them cry“, fits very, very well, there is no doubt about that. If you take a look at the Wikipedia article about him, you will see that half of the article deals with his sweethearts and wifes, he had at least 12 illegitimate children! He was also known as the Merrie Monarch.
The lines “When the boys came out to play / Georgie Porgie ran away“, also fit very well, because he fled often from the “boys“ - the troops of Oliver Cromwell - to France or the Netherlands. After his troops were defeated in the battle of Worcester (1651) he avoided being captured by hiding in an oak tree.

One final remark for fans of rock music. The American group TOTO recorded the following song in 1978. They focus on the lines “Georgie Porgie pudding and pie / Kissed the girls and made them cry“ and contrast these verses with a declaration of love from some kind of Georgie Porgie. This is another example of how a myth, poem or fairy tale etc, which belongs to the collective consciousness, is used to give a new and sometimes deeper meaning.