History, origin and meaning of Mary Mary Quite Contrary

There are different interpretations of this nursery rhyme, but most of them put Mary I, Bloody Mary, in the center. The historical context is explained in detail in the comment of the song Three Blind Mice. Mary I (1516 – 1558) issued from the the first marriage of Henry VIII (1491 – 1547) and Catherine of Aragon (1485 – 1536). When her father divorced to marry Anne Boleyn (1501 – 1536) she became “illegitimate“ and was no longer heir to the throne. Henry VIII declared himself the head of the Church of England in order to divorce Catherine of Aragon. After the death of Henry VIII, his son from his third marriage with Jane Seymour ascended to the throne, Edward VI, who died in 1553. Because of the fact that Edward had changed the succession to the throne, for a very short time the protestant Lady Jane Grey (Edwards cousin once removed) ascended to the throne ahead of the catholic Mary, but she was not accepted by the people and imprisoned only thirteen days later. Mary I finally ascended to the throne in 1553 and this was the beginning of the suppression of all non-catholics. The first line “Mary Mary quite contrary“ can therefore easily be understood. She was indeed very contrary to the religious politics of her father and her half-brother Edward VI. The fact that there is another song about the persecution of non-catholics during the reign of Mary I, and that her sobriquet was Bloody Mary due to the persecution and execution of many non-catholics, the sardonic tone of this song makes it very plausible that it is also about Mary I and the persecution of non–catholics.
Regarding the song‘s details, the growing gardens, the silver bells, the cockle shells and the pretty maids in a row, the meaning is less clear. The growing garden can be interpreted as a cemetery, which became bigger with every executed adherent to the Chuch of England. Regarding the silver bells and the cockle shells, which are very often supposed to be instruments of tortures, the problem becomes evident through a google search. When the words ‘instruments of torture and cockle shells‘ are searched you get thousand of results, but all of them are connected to the song Mary, Mary quite contrary. In other words, there is strong evidence that the same affirmation has just been copied thousands and thousand of times. If cockle shells could actually be a instrument of torture, it should be possible to find a description of them without a reference to that song. Similar results are found with ‘instruments of torture and pretty maids in a row‘. 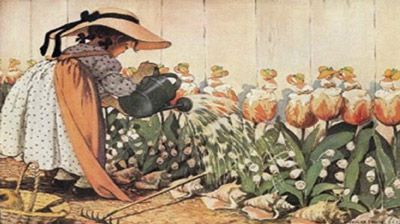 So you can see, that in these cases, there are two commonly spread opinions, one as unlikely as the other. The other opinion is that Mary, Mary is a sweet little girl, with a nice garden. She is portrayed in this way thousands and thousands of times. You have two different interpretations of the song, one completely different to the other, widely spread and living specifically together. This phemomenon is even more interesting and astonishing than the question of what the song is actually about!