Speed, bonnie boat,
Like a bird on the wing,
Onward! the sailors cry;
Carry the lad that's born to be King
Over the sea to Skye.

Loud the winds howl, loud the waves roar,
Thunderclouds rend the air;
Baffled, our foes stand by the shore,
Follow they will not dare.

Speed, bonnie boat,
Like a bird on the wing,
Onward! the sailors cry;
Carry the lad that's born to be King
Over the sea to Skye.

Though the waves leap,
Soft shall ye sleep,
Ocean's a royal bed.
Rocked in the deep, Flora will keep
Watch by your weary head.

Believe it or not, but there is no doubt about the meaning of this song! The song is written by Sir Harold Boulton, 2nd Baronet, in the 1870s and it is really different to most other nursery rhymes as it contains a lot of data (born to be king, Skye, Flora) which allows us to determine the historical background of the song. But that’s not the only difference between this song and most of the other nursery rhymes. The tone of the other songs has usually been sardonic or scornful and no side has been taken. If you think about songs like Goosey Goosey Gander (the catholics were persecuted, but the song doesn’t reveal any sympathy, not for the persecutors, nor for the persecuted), Mary, Mary quite contrary (Bloody Mary contains a moral evaluation - Mary, Mary quite contrary is neutral), Three blind mice (no sympathy for Mary I, but not for the protestants either). But this song is really different - there is a clear sympathy for Charles Edward Stuart, the young pretender, “young“ to distinguish him from his father, the old pretender. But let's start from the beginning:

We have already seen that his grandfather, James II (see comment for Rock-a-bye baby, on the tree top), tried to lower the restrictions imposed on catholics and converted to catholicism, making it public, a process that had started while he was still married to the protestant Anne Hyde (1638 - 1671). From this marriage issued two protestant daughters, Mary, who married William III, who would with the consent of the english parliament, overthrow James II, the last ruling Stuart, her father, and Anne, who would ascend to the throne after her sister Mary and her husband had died. James II also had a son from his second marriage with Mary of Modena, James Francis Edward Stuart, the old pretender and father of the the king named in this song. We have already seen that the years of the Tudor Monarchy (Henry VIII, Mary I and Elizabeth I) and the Stuart Kings (James I, Charles I, Charles II and James II) were characterised by strong religious, social and ethnical conflicts, mixed with the simple struggle for power. These conflicts are reflected in the various nursery rhymes, but they never show any symathy for one group or another. However, before we start to try to explain that, let‘s first see what the song is about. 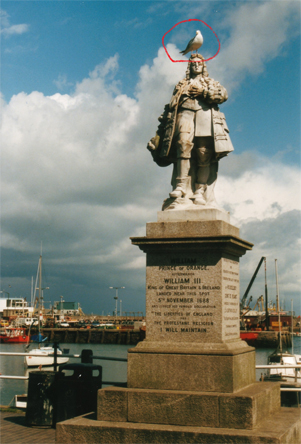 The old pretender, James Francis Edward Stuart (1688 – 1766), was born on 10 June 1688 - the same year the english parliament asked William III to come to England with an army and overthrow James II. This event is commemorated in this monument at the harbour of Brixham, where William III landed in on November 1688.

In this insecure situation, James‘ wife Mary of Modena and his newborn child James Francis Edward, fled to Louis XIV, King of France. The old pretender therefore spent his whole childhood in France. All of the last three Stuarts (theoretically we could call Mary, the wife of William III, the one who overthrew her father from the throne and Anne, who became Queen of England after the death of William III and Mary in 1702 Stuarts as well, because they were the daughters of James II) tried to regain the throne of England, but all attempts failed. The first attempt was made by James II only one year after his destitution. He landed in Ireland in March 1689 to fight against his daughter Mary and her husband William III. For the Irish Parliament he was still the King, but James II was defeated in the Battle of the Boyne in July 1690. After the battle he fled to France again and never returned. His son declared himself King of England and Scotland in 1701 after the death of his father. He was recognised as King by France, Spain, the Papal States and Modena, where his mother, Catherine of Modena, came from, but it was only in 1708 that he tried to overthrow his half sister Anne from the throne. This attempt failed, because the French fleet, supporting this attempt, was driven back by the English. The next attempt to regain the throne of England and Scotland took place seven years later, in 1715. Meanwhile, the German speaking George I had ascended to the throne, in 1714, after the death of Queen Anne the same year. He landed in Scotland but was defeated in the battle of Sheriffmuir. That was the second and last attempt of James Francis Edward, the old pretender, to ascend the throne. Once again he fled to France, but after the death of Louis XIV, his cousin, the Stuart family was no longer welcome in France and settled in Rom. 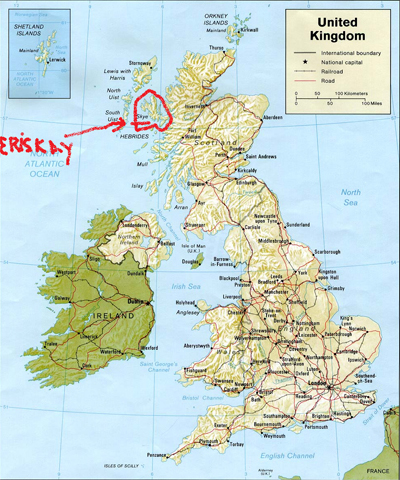 In 1719 James Francis Edward Stuart married Maria Karolina Sobieska and from this marriage issued the young pretender, the hero of our song, Charles Edward Stuart (1720 - 1788). He started his campaign to restore the house of Stuarts in England and Scotland in 1745 when he landed in Eriskay. Eriskay is just a little dot, a little island beneath the island of South Uist. (Much bigger is Skye, the other important island in this story,...over the sea to skye...).

By the time he arrived in Eriskay, the King of England and Scotland was George II. Due to the support of a large part of the population, his campaign to conquer England was successful at the beginning but his troops, approximately 6000 men, where defeated in the battle of Culloden on April 1746. If you don’t know where Culloden is you can find it on the map. 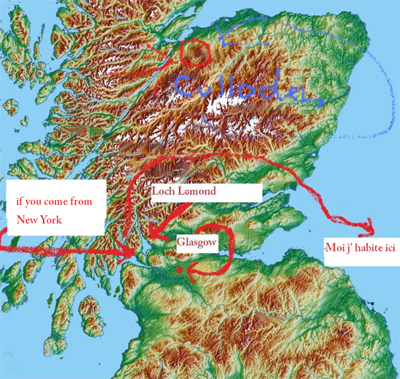 The song is about the escape of Charles Edward after he had been defeated through the moors and highlands of Scotland. With the help of Flora (Flora MacDonald), he escaped to Skye, where he would find a French ship which took him back to France. This was the definitive end of the house of Stuarts in England, Scotland and Ireland.

As we have already discussed at the beginning of this article, this is one of the few nursery rhymes with, lets say, a more friendly feeling. Most of the other songs with a historical background are just sneering, derisive and sarcastic and don’t side with any party. This one is very different, there is a clear sympathy for one party (...Baffled, our foes stand by the shore ...) and the tone is not sarcastic. Only the song Bonnie Banks o' Loch Lomond has a similar, more kind tone. In part that might be explained by purely musical reasons, but such musical reasons and the fact the song uses elements of the scottish folk music cannot explain the difference in the text. Easy explainations are obviously not helpful. It is not possible to say that Scotland was Catholic and England was Anglican, because in both nations were adherers of each religion. It is not possible either to say that in one country the influence of France or Spain was bigger than in the other, as both countries were influnced and under control of these nations in certain periods. Obviously, in some periods the Scottish feared to be dominated by England, but not all the Scottish shared that feeling. It seems that the sympathy for Charles Edward was stronger in the Highlands and was not the feeling of all the Scottish. Their sympathies for Charles Edward perhaps can be explained by social problems, which obliged many highlanders to emigrate to America, although it is not very clear why they hoped that Charles Edward would resolve these problems or what he should do in order to resolve them. More generally, it is not clear, what they expected him to do. It can be assumed that the Highlanders regarded England to a higher degree as “a foreign“ country than the Lowlanders did. They spoke a completely different language, Gaelic, which is not, like Scots, a Germanic language but a Celtic language and therefore completely different. But even if there was a cultural problem, it is hard to see why the Highlanders thought that Charles Edward, born in Rome, would improve their situation. The only possible reason can be that the enemy of my enemy is my friend. There is one piece of evidence where it is not helpful to speak about Scotland as a whole when discussing the events before the battle of Culloden on April 1746. After the defeat of the Army of Charles Edward, there was a strong repression of the Highlanders and Gaelic was forbidden, Highlanders were not allowed to bear arms and more missionaries were sent to the Highlands to teach the the people Presbyterianism. More and more Highlanders lost their land and were forced to go to America, where thy were welcome for political and economic reasons.